The holiday season is in full swing and in keeping with the spirit of giving, Moose River Farm has recently opened its arms and given a home to two baby donkeys.  Their arrival attracted much attention over the weekend as many well-wishers stopped in to meet the tiny newcomers.  Even the goats, horses and Fiona, the pig showed great interest in the tiny equids who seemed to have appeared out of thin air overnight.
"Why do you want donkeys?"
"What are you going to do with them?"
"What are they good for?"
Not sure how to answer all of these questions, as only time will tell.  So before I formally introduce you to the new additions allow me to share the story that brought them to the Adirondacks.

Operation Donkey Drop
"Reba!" I whined.
"Aww!  Reba!" came the reply followed by a chorus of sympathetic giggles.
"She was so sweet!  I want Reba!"
The little donkey mare had made a lasting impression on me when she pushed her way passed two smaller baby donkeys to fill the space provided  by my open arms.  By pressing against my chest and dropping her head over my shoulder, I had no choice but to wrap my arms around her.  What a love!  I have no doubt that she was desperate to show me that despite her larger older size, (1.5 years), she was a better specimen than the two tiny babies competing for my affection.  Her gesture won my heart.
Unfortunately, the logistics of getting Reba the donkey to the Adirondacks on her way from Equine Affaire in West Springfield, MA to her home in Indiana was going to be next to impossible.  Therefore, I was forced to peel myself away from our embrace and leave her with her two tiny companions.
What I couldn't leave behind was my peaked interest to acquire donkeys.  Perhaps there was a donkey in need out there who could find his or her way to Moose River Farm.  Keep in mind that I was not alone in this desire.  I had accomplices.  Since two of them were children, two of them were mothers, and all of them were regular caregivers to the residents of MRF, I also had pressure.
"Let's get a donkey!"
"It would be so cute in the barn."
"We need a donkey!"
"I want a little baby donkey!"
"Reba!  Oh Reba," they chorused.
For the next several weeks we joked and talked about baby donkeys constantly.  Frequently, I received emails with pictures of donkeys doing the cutest donkey things.  I also began casually to mention to my horse friends, connected in the industry, that perhaps I might be interested in a donkey if one became available.  That is all it took.
"Two donkeys available," read the broken text message from Missy, (Walking with the Animals).  After an exchange of pictures and information it turned out that these two donkeys were surplus babies from a petting zoo in NJ.  Thanks to Missy and another friend Mary Anne, the necessary arrangements were finalized and my two friends were finally on their way with the Adirondack's fuzziest new residents.  Allow me to introduce Frank, (Sinatra), and Bing, (Crosby), MRF's miniature donkey crooners! 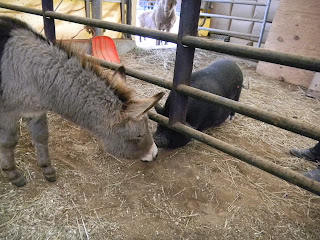 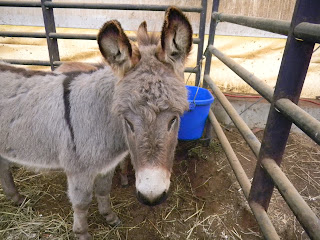 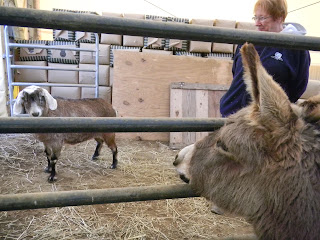 Lacey stops by to be introduced. 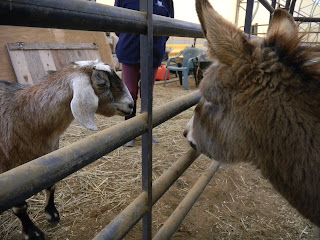 Lacey is naturally curious about the newcomers. 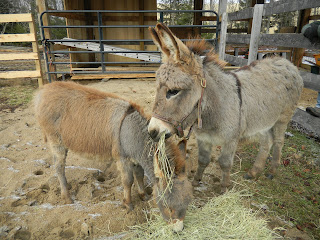 Bing and Frankie in the outdoor paddock. 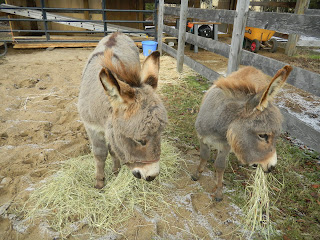 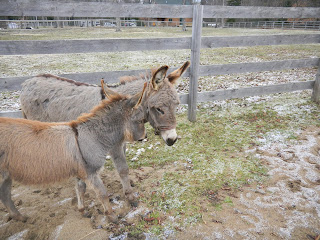