A Cold Blood's Tale to Warm Your Heart, (Part II)

Good Afternoon,
Last weekend I posted Part I of an excerpt from my second book, due for publication next summer. The story was the account of the final days of our iguana, Rosemary, after a devastating diagnosis. In Part II, acceptance of her imminent loss comes with the realization that all is as it is meant to be.

Rosemary, (continued)...
"Judging from her condition and the size of the mass, we are probably talking about a matter of weeks. She looks comfortable and as long as she is eating and able to relieve herself, she should be okay. As soon as you notice her straining to go to the bathroom, then it will be time."
"I am so sorry," said Dr. Roach as Vicky and I gathered our belongings to leave.
In the reception area I waited in emotional agony to pay the bill.  Rosemary's appointment had consisted of an ultrasound and an x-ray to confirm the fatal prognosis; money well spent. 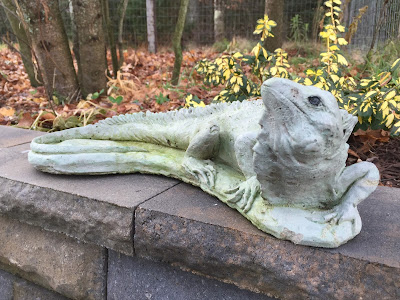