Good Evening,
I was one of those people who emphatically proclaimed that I didn't want any female horses at Moose River Farm.  Since I planned to teach riding lessons, I was only interested in employing the easy going, non-cyclical temperaments of geldings who could reliably handle the realities of beginner riding lessons.  Although, my first horse, Summer's Promise, was female, she had been the exception to the 'witchy mare' rule.  Of course since 2006 when we acquired Lowtchee, a laid back Friesian mare, and 2011 when Makia, a wonderful Thoroughbred mare arrived, I have not only changed my mind about mares, I have also had a change of heart.  Both of these girls, particularly Makia, have prompted me to sing praises of mares in general.  I have also become a fan of many famous athlete mares including racehorses Zenyatta, Rachel Alexandra and Dressage horse, Rocher.
In 2005 I had the great pleasure of watching Rocher perform and win an unforgettable Grand Prix Freestyle with her rider, George Williams at Dressage at Devon.  She was at the peak of fitness and at the top of her game displaying the agility of her athletic abilities behind her signature long and floppy ears.  The crowd fell in love with Rocher that night as she danced to a medley of Madonna music, so fitting to the mare's superstar image.  The affection that her rider felt for her was evident in the exuberant praise he lavished on Rocher after their final halt and salute.
While attending Dressage at Devon this past September a rumor swept the show grounds that a famous horse was to be retired in an official ceremony just before the Grand Prix Freestyle on Saturday evening.  While touring the schooling area and barns with my sister, Sue, we came upon a group of people primping and polishing a large black horse.  In an instant I recognized the floppy, almost donkey length, ears anchored to a lovely equine expression below.  There we stood, only a few feet away from female athlete greatness.  Immediately, a crowd swelled around the mare as word spread that it was indeed Rocher who was to retire in the Dixon Oval, (main ring at Devon) that evening.  Sue and I stood transfixed by Rocher who appeared ultra relaxed under the flurry of activity taking place to polish her up for one more parade under the limelight.  Eventually, George Williams, Rocher's rider appeared on the scene in a coat and tie to take hold of the reins and lead the mare up to the ring.
An official looking man from the mare's entourage began to issue orders to get the mare moving.
"Can you stand next to her George, please?" I asked, trying to get my camera ready quickly so as not to hold them up.
"Let's go!" Ordered the man urgently.
Graciously, George stepped close to Rocher and put his arm around her jowl.  The crowd clicked away as he stood patiently and appreciatively for those who had supported their partnership for so many years.
There wasn't a dry eye in the crowd that evening while the highlights of Rocher's incredible contribution to the sport of Dressage were recapped over the loud speaker.  When her saddle was removed for the last time and she exited the ring, a fleeting emotion of loss came over me.  Seconds later it was replaced with a sense of gratitude for the mares in my life,...both past and present. 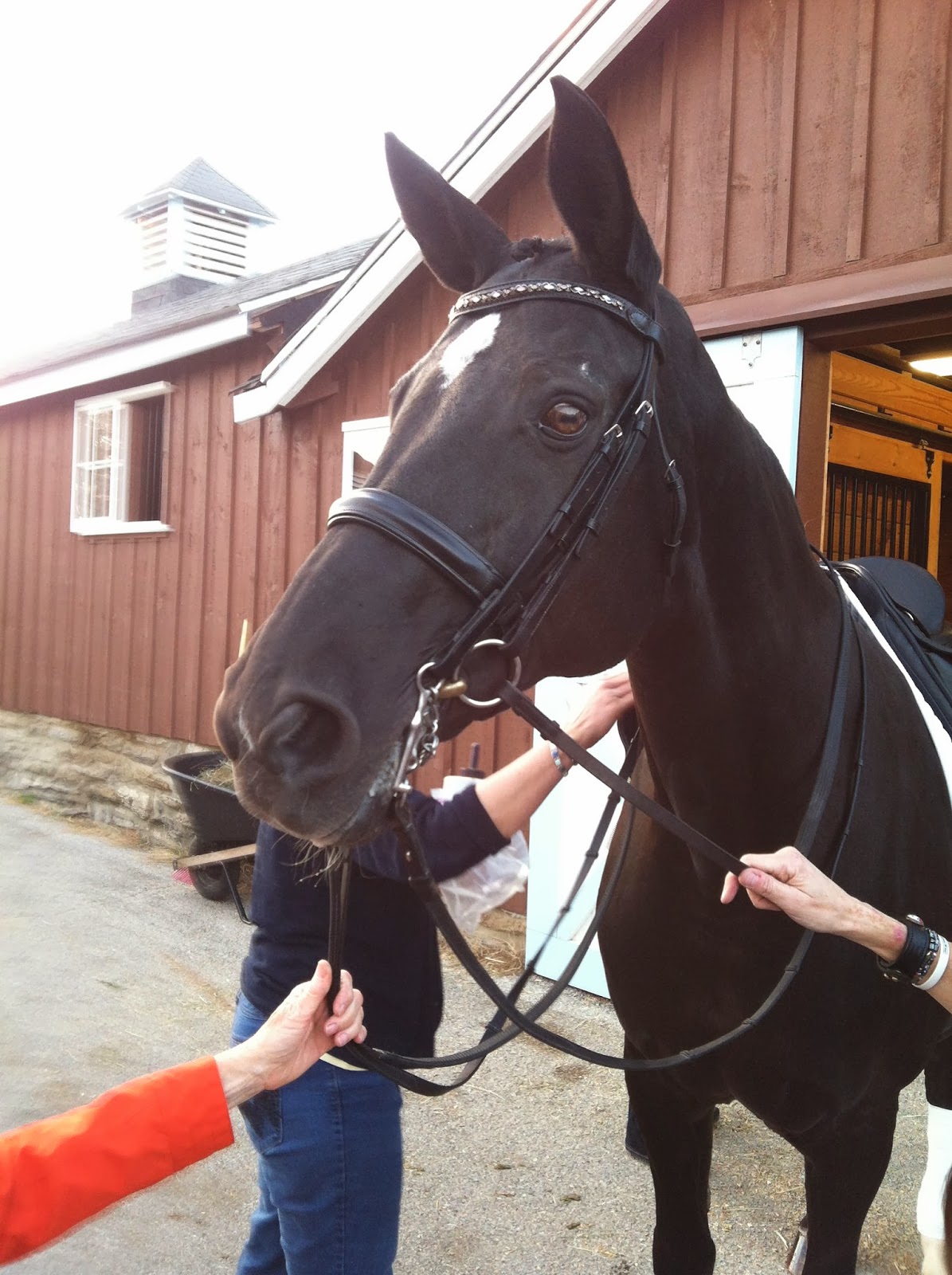 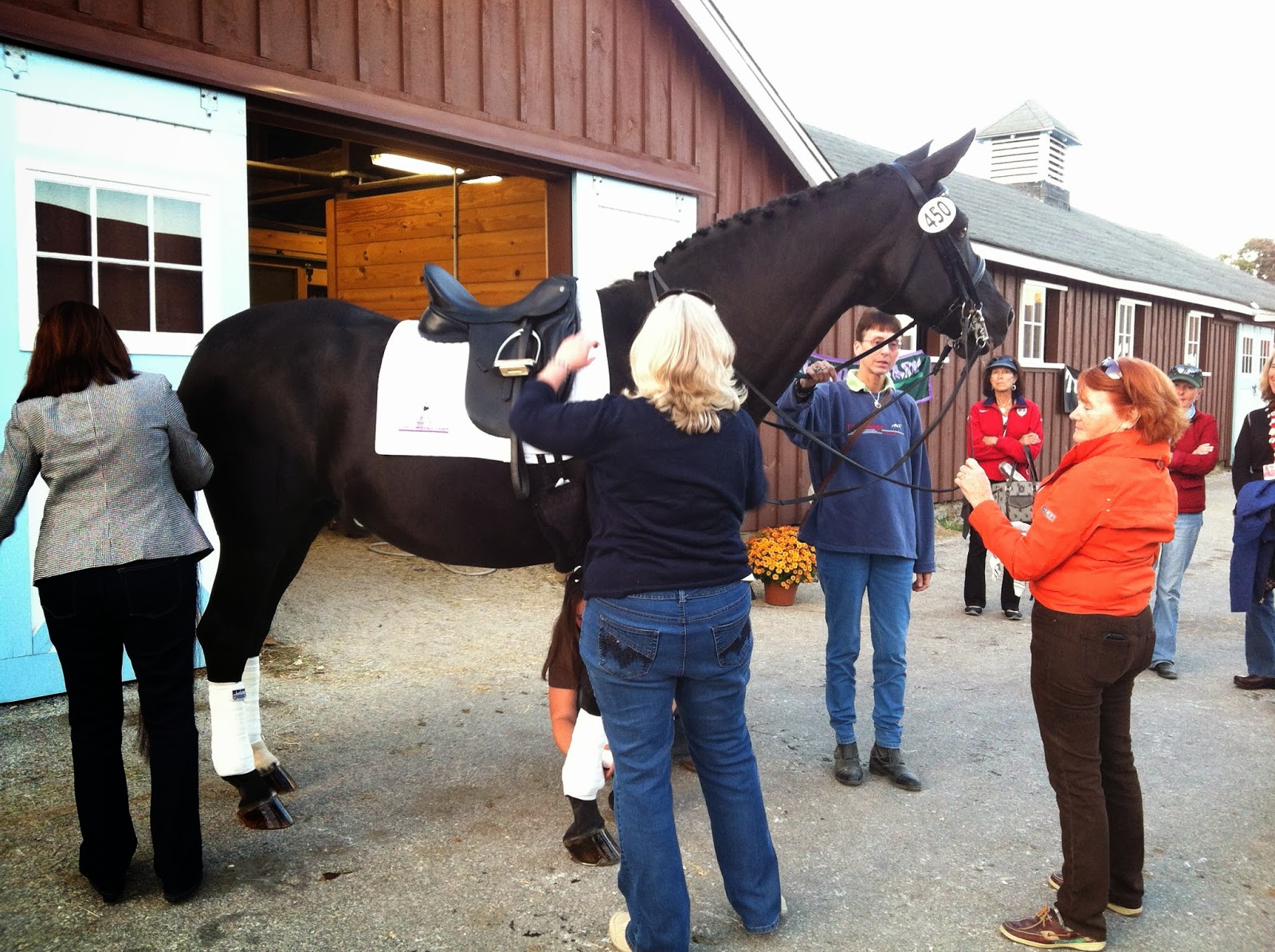