Good Evening,
Summer is in full swing at Moose River Farm which means my daily routine begins early with the chirping birds and ends well after Taps plays through the trees from Adirondack Woodcraft Camp, next door.  In between there is so much to do and none of it requires a trip in the car.  In fact, it is not unusual for several days to pass before I leave the farm in search of groceries or to run other errands out in civilization.
Instead, my days are full of nothing but animal interactions which raise my mood and keep me forever appreciative of having chosen a life at the center of all of these wonderful beings.  Our four dogs are a large part of the focus.  Rod and I take them, along with the goats, (Walking With The Animals), for a walk every day after lunch so that we can bask in the beauty of our woods and watch the antics of the dogs as they sniff, chase and react to signs of wildlife out there.  Once they return to their fenced in backyard, they pant excessively with lolling tongues, then nap for the afternoon in the shade of our breezy maple trees.
Four dogs is a bit excessive and is not necessarily the ideal number for us.  However, three years ago, I began to grow concerned about the close proximity in age among our three dogs, and how, like the generation before them, (Welcome Huxley), we will suddenly be left with three dogs who age rapidly only to leave us brokenhearted yet again.  Therefore, in the summer of 2009, we decided to acquire a Dachshund puppy who would still be young and able when our other three entered their golden years.  In today's excerpt from Finding My Way to Moose River Farm, a shocking discovery prevents us from returning home with the wrong puppy.

Finding Hayden
I located a litter of puppies who were being reared by a relative of Huxley's breeder.  When the pups were two weeks old, Michele, (Friends and Blessings), and I drove out to Oswego, NY to see the precious newborns.  The puppies were so helpless and tiny!  With her nose poking through the wire mesh of the kennel, their mother remained focused on every whimper emitted from the plastic dishpan that the pups were presented to us in.  Although the puppies' sealed eyes and plugged ears had yet to reveal their individual personalities, I gravitated toward the only liver colored male with little white toes on his back feet.  For the next four weeks I dreamed about my little male puppy with his white digits while counting the days until he became ours.
Six weeks after Memorial Day weekend when the puppies were born, the breeder declared them weaned and ready to go to their new homes.  With great anticipation Rod and I drove out to Oswego arriving by late morning.  Having expressed interest in only a male puppy, the breeder had accumulated the males in her kitchen in preparation for our visit.  Seeing them again, now four weeks older with eyes wide open and clowning about on sturdy legs and paws, Rod and I became enchanted.
We began picking the puppies up to inspect them.  Of course I was looking for the special little male with white toes.  As we began to make our final decision, Rod had fallen in love with the first one that he picked up.  The pup sat in his arms against his chest without resistance and seemed to have claimed Rod as his very own.  I, on the other hand, had finally located the white toed puppy and was determined to make him our final decision.  But Rod had made the choice already and reluctantly, I put my puppy back in the dishpan with the squirmy mound of remaining pups.
Next, I signed the check that declared us the owners of the little puppy in Rod's arms.  I must admit that I felt a bit sad at that moment.  The puppy I had chosen was now up for grabs and I was walking out the door with a puppy whom I hadn't dreamed about.  Further confusion veiled my thoughts when Rod showed me that his puppy had white hind toes too.  I was certain that only one of the little males possessed them making him an individual among the mass of 4 or 5 in the dishpan.
Off we went with our precious cargo.  Once in the car, Rod handed me the little angel who I held while he drove.  The puppy was frightened but snuggled in my lap as I caressed him with my hands.  Eventually, the little baby fell asleep and my emotions began to let go of the puppy left behind in order to embrace this tiny one about to join our family.
Twenty minutes later we pulled into the parking lot of Walmart so that Rod could run in and buy a few necessities for our puppy, including puppy food and a toy or two to comfort him.  While Rod shopped, I began to study our puppy from head to toe and was particularly interested in the little white toes that were nagging at the back of my mind.  As I turned the puppy over I made a startling discovery.  He was a female!
Suddenly, my mind began to race as it occurred to me that we were going to have to return this little puppy to the breeder and retrieve the little male with the white toes.  For one thing, the females cost quite a bit more money than the males.  But the most important reason was because we already had an alpha female dog at home.  Our West Highland Terrier, Nina, may have made life very difficult for another female dog and we weren't willing to take the chance and find out.
By the time Rod returned to the car, I had already made the phone call to the breeder who was now expecting us to return the little female at once.  In fact when we arrived at the house, she met us at the door and grabbed the little female quickly while shoving the only male puppy with white toes back at us.  It was an uncomfortable situation, but given that she had assembled all the males for us to pick from, it didn't occur to either Rod or me to actually confirm gender with our own eyes.  Of course in hind sight we should have and certainly will in the future.
Back in the car I began to study the little creature who had captivated me four weeks earlier and who had entertained my thoughts ever since.  He looked up at me with his almond shaped eyes and began to 'speak' in a language of words spelled with consonants only.
"r vr m, rd vr," he sighed as I held him up in front of my face for a full frontal view of his tiny body. "rd hrp vrd dr."
And so life with our white toed puppy and his extraordinary vocabulary began that day.  Although we still wonder from time to time, what happened to the little female with the mistaken gender identity, there is no doubt that we have the special dog who was meant to be ours. 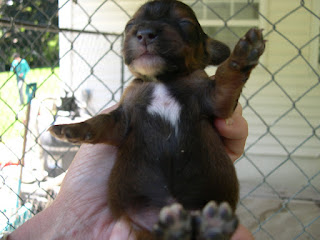 When I visited the puppies for the first time at 2 weeks old, I selected the only male who had little white hind toes. 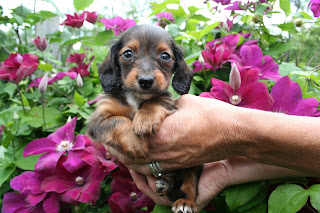 After a gender identification glitch, we arrived home with our six week old baby and named him Hayden. 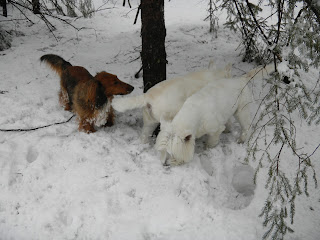 Hayden has grown up into a wonderful little dog who is full of fun and loves to play with our West Highland Terriers, Nina and Niles. 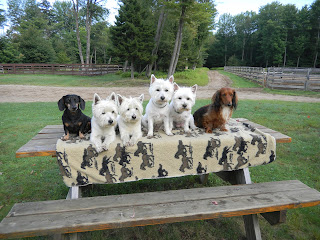 When the 'Westie' family reunites several times a year, a group photo is always taken.
From left to right; Huxley, Niles, Nina, Lynnie, Xena, and Hayden.

For more cute pictures of Hayden click the links below;