Hoofbeats in the Adirondacks

Good Evening,
It is hard to believe that a whole year has passed since the first presentation of Hoofbeats in the Adirondacks took place at Moose River Farm.  A whole year!  Next Thursday, July 12th, Hoofbeats returns with a brand new slate of performances that includes vaulting, high level Dressage and an all new Quadrille.  After last year's Hoofbeats, I sat down to reflect on the experience for the last chapter of Finding My Way to Moose River Farm.  It seemed fitting to end my first autobiographical volume where my love of horses and my love of music united in such a grand display of artistry.  As finishing touches fall into place for the 2012 performance, memories from the first one motivate my team and me to pull it all together for a second time.

Hoofbeats in the Adirondacks
Horses are such noble beings, full of the same grace and natural beauty that abound in the mountains, lakes and other landscapes of the .  Each year thousands of people visit our region seeking out riding stables that will enable them to explore the woods on horseback.  Horses and the are a natural association.  In July of 2011 the concept of horses in the was taken to a whole new level when horseback riding was displayed as an art form outside of Old Forge, NY.

Moose River Farm set the stage for the first production of ‘Hoofbeats in the ’.  The show combined a variety of equestrian performances with moving music that transformed the training facility into a sunlit theater.  All proceeds from ‘Hoofbeats’ went to View, the new home of the .
For many years I have tried to come up with incentives to keep my more advanced riding students motivated in their training.  Due to the distance that we live from any sort of horse show circuit, there is little opportunity for the students to compete.  The advanced age of my equine charges also prevents campaigning horses on the competitive level.  I needed to come up with something to give my students a goal to train towards, thus encouraging them to ride with purpose.  In July of 2009 ‘An Evening at Moose River Farm’ displayed the various levels of rider’s skills in a riding ‘recital’ format.  Set to ethereal and up-tempo background music, each student ‘performed’ for an audience of about sixty parents and family members.

The combination of music and horses was magical, and I couldn’t help feeling that there was something within this genre that could be developed into an art form.  By the winter of 2011 the concept of ‘Hoofbeats in the ’ was beginning to appear with great clarity.

On the home front Moose River Farm established a mounted Quadrille composed of four young ladies on horseback who performed with cavalry style precision to the theme from The Magnificent Seven.  By late May the Quadrille was ready to fine tune the choreography that my good friend and musical expert, Jean Risley, (Friends and Blessings), and I had put together.

While the Quadrille’s routine improved with every practice, my mind began to develop a performance in which a bipedal human dancer and a four footed equine athlete could perform together.  The ‘duet’ demonstrated the unique similarities between two entities encouraging spectators to consider the bond between them.  As ‘Hoofbeats’  loomed into view with only three weeks to go, a simple routine was assembled with a lovely show style rider from Texas, named Chloe Pedersen and a local dancer named Roy Tracy.  A handsome Paint gelding named Partly Cloudy, (Joshua), provided the perfect compliment to ’s limber dance abilities.  The performance began with a brief display of vaulting movements that flowed over the Paint’s back, while Pink filled the atmosphere with Glitter in the Air.  When  dismounted the horse in a front flip it was Chloe's turn to sit in the saddle and pick up the reins.  From that point Chloe rode a simple Dressage test that displayed the horse’s natural rhythm at the walk, trot and canter, while leaped, and glided close by.

The third act of ‘Hoofbeats’ combined a haunting melody, Conquest of Paradise by Vangelis, with the Baroque beauty of two Dutch Friesians inclulding my own six year old mare Piepelotje.  To accompany us in this performance, I enlisted the help of trainer Julie Fisher who owns Havenhurst Farm in Barneveld, NY.  She brought her Crown mare, Herlijk to ride the duet with me which displayed the sheer vibrance and raw power of our gorgeous black horses with their flowing manes and ‘feathered’ ankles.

As poised and practiced as these three performances were, ‘Hoofbeats in the ’ still needed to showcase horseback riding at an even higher level.  To complete the program two FEI, (world class) riders agreed to bring their own horses and perform for the crowd.  Catherine Howard, a USDF Bronze and Silver medal certified Dressage rider and trainer performed a Kur on her Lusitano gelding, Xerife.  She and her horse performed as a pair of pirates to the theme from Pirates of the Caribbean by Hans Zimmer.

Darleen Callahan owner of Ollyoop Farm in also signed on to bring her Grand Prix Oldenberg mare, Adel Adrianne and perform a Kur with a Circus theme.

With acts in place and practicing regularly, there was only one thing left to do; pray for glorious weather and no flies, the latter which could ruin any degree of comfort for horses, riders and spectators.

When July 7th dawned, my prayers had all been answered.  The day was bright and sunny with a high in the mid 70’s.  The bugs remained at bay as well.  Finally, the hour ticked into sight.  All of us involved in the organization could begin to sigh in relief as our efforts were about to pay off.  Shortly after the initial spectators began to make their way through the woods between the designated parking area and the barn.  They followed a trail of golden horse shoes which inevitably led them to the seating area at the front of the arena where the horses and riders were about to perform.  By over 200 people had assembled in anticipation of the spectacle about to emerge from months of preparation and weeks of practice.  It was show time!

After a brief introduction from the President of the Old Forge Chamber of Commerce, Mike Farmer, Miriam Kashiwa the founder of the spoke about the connection between horseback riding and performing arts.  Her calm inflections and articulate manner welcomed all who had come to watch various levels of Dressage set to music.  I couldn’t think of a better way to set the audience up for the spectacle they were about to witness.

CNY news anchor woman, Laura Hand took the microphone from Mike Farmer and proceeded to announce each of the performances.  Her immense knowledge of sport horses educated the crowd between acts filling in any stagnant lapses of time.

The intense time and training that went into each of the three Moose River Farm performances for “Hoofbeats” paid off as the show opened with a tribute to the horse-human bond in A Dance Between Species.  Next, MRF rider Courtney Holt demonstrated the unique trust that connects horse and human when training begins with silent communication between them in Join-up.  She and a bay gelding named Sandi began with a brief playful chase that sent him galloping with exuberance around the ring.  After a few minutes he was allowed to stop, approach, and follow at her shoulder as she walked about the ring.  Then she climbed up on his back and proceeded to ride him sans saddle for a brief demonstration of their mutual trust in each other.


At intermission, New York Times bestselling author, Susan Richards, (Chosen by a Horse), read an excerpt from one of her books.  This allowed time for the FEI riders to prepare for their long awaited performances.  As the crowd took their seats for the second half of the show, Cowboy Will Hollister demonstrated for the audience what they were about to see using laymen terms as Laura Hand requested the formal term for each movement.
“Can you show us some tempi changes, perhaps every stride? Laura suggested.
After a brief scan of his notes that Cowboy Will had jotted down for reference, he addressed the audience in words easily understood by those not familiar with technical Dressage jargon.
“Oh that’s just when the horse goes off skipping,” he affirmed. “Come on Moose, let’s show them how we skip.  Cowboy Will then took off at the ‘skip’, changing his lead every stride with a swish and a flare!

When the FEI riders took over the ring they brought a whole new level of the horse’s capabilities to the stage by performing piaffe, passage and tempi changes to moving music.  Their costumes blended into the theme of their music which resulted in a playful and relaxed exhibition of the sport they had trained so thoroughly with.
Darleen Callahan demonstrated the various movements that she and Adrianne had perfected in the years that they showed at the Grand Prix level.

As the spectators headed back through the woods to their cars at the end of Hoofbeats in the Adirondacks, the organizers and I took a quick glimpse into the future at July, 2012.  What we saw excited us enough to begin planning for next year! 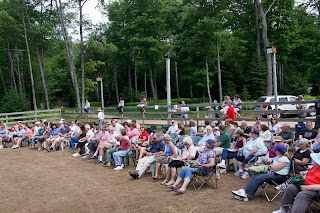 Over 200 spectators enjoyed Hoofbeats in the Adirondacks. 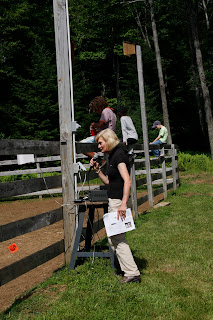 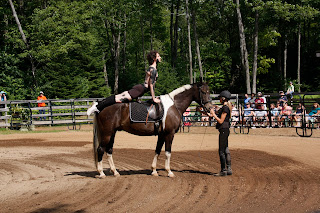 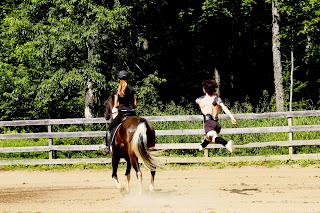 ...before Chloe took over the reins so that Roy could dance with Joshua. 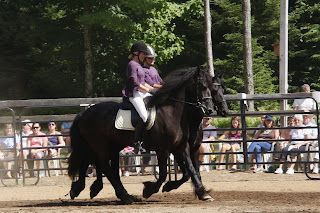 The Friesian Duet with trainer Julie Fisher from Barneveld, NY. 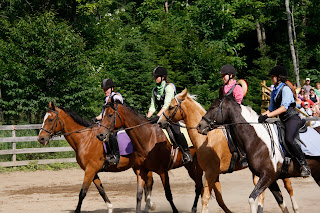 The MRF Quadrille aka The Magnificent Seven 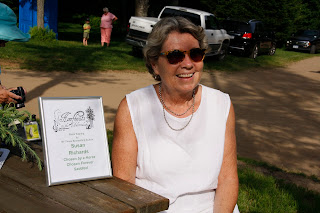 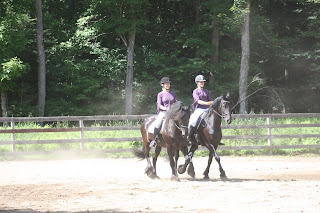 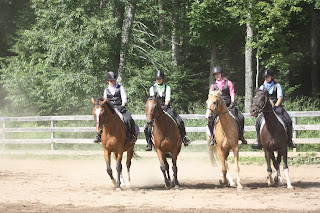 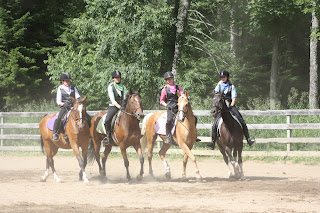 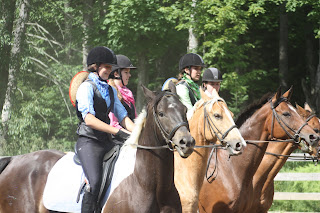 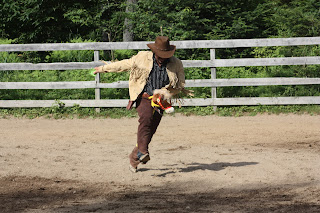 At intermission, Cowboy Will entertained and educated the crowd about Dressage. 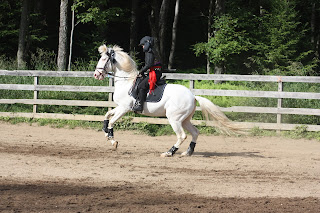 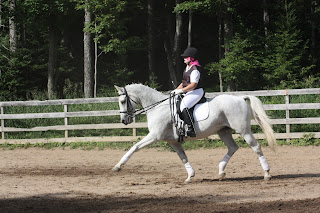