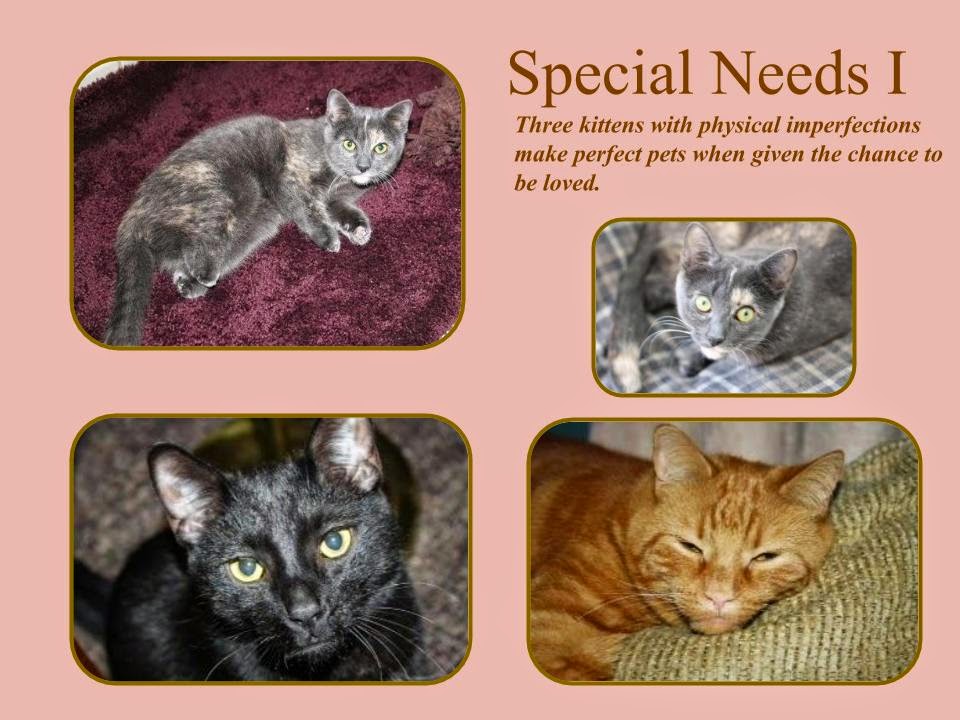 Good Morning,
My friend, Vicky has a collection of cats who might never have found forever homes. She is attracted to those with special needs.  Time and again these animals have rewarded her with love and devotion; a testament to their gratitude for being given an opportunity to do so.  In addition they have demonstrated to Vicky how well an animal can adapt and establish itself as cherished member of the household.  Looking passed their peculiarities and disabilities, Vicky has accepted them as they are.
Perhaps the most inspiring of Vicky’s cats is a gray tortoiseshell female. Four years ago, Vicky heard about a litter of kittens that included one with a severe deformity. Aside from an unusually stiff tail, the kitten was born without fully formed feet. She also appeared to be missing lower forearms and lower hind legs. This stubby conformation prevented her from learning how to use a conventional litter box.

Eventually, all of the normal kittens were adopted. Sadly, the remaining one was kept isolated in a bathroom while the owner determined her fate. Vicky was working for a local veterinarian when she became aware of the unwanted kitten's plight. For days the image of the lonely six month old baby, haunted her. She felt compelled to intervene. Finally, Vicky made the decision to take the kitten home and assess its abilities.
At first the kitten was quite shy for she had rarely interacted with people. A severe case of diarrhea added to the challenge of caring for such a needy kitten. Bathing the un-socialized cat added unavoidable stress to the situation. Immediately, diet was addressed and changed to combat diarrhea. A litter box was modified to accommodate shorter legs. The kitten was also spayed. No doubt, Vicky had her hands full but patience and problem solving paved the way to make a happy life for this kitten.
Four years later, the cat, Fern, is an inspiration to all. A distinct rhythmic gait easily identifies her when she bounds about the house. Fern is still a bit shy around strangers and she doesn't love being held. However, she does seek out a lap to sit on and at bedtime she curls up on her own special blanket between Vicky and her husband, Mike. Sweet Dreams Fern.
One year later, Timber, a red tabby found his way into Vicky's home. He was a healthy rescue who struck a heart string with his tiny ginger good looks. There was hope that this kitten might provide company for Fern. Fern, however, was not impressed. She had spent too much time as an only cat and planned to maintain her status as such. Timber was not discouraged. He loves to socialize with people, but only those with whom he is well acquainted. Until then he remains shy and a bit aloof.
Two years after Fern's arrival, Vicky took in another cat with special needs. This little guy was born with cerebellar hypoplasia; a condition caused by a viral or bacterial infection, injury or poisoning while the kitten is in utero. The permanent effects include spastic, uncoordinated movements that frequently result in miscalculated jumps and falls.
This kitten had another lethal factor stacked against his chance of finding a home. Although his condition was not life-threatening, his coat color was. Black cats are the least likely to be adopted, for whatever reason. Once again, the fate of this innocent animal weighed heavily upon Vicky's heart. She adopted the little one and named him Woody to compliment an Adirondack theme already established by Timber and Fern.
Woody is the sweetest cat Vicky has ever owned; a little simple perhaps but without a mean bone in his body.  From the day that Woody arrived, Vicky engaged him in physical therapy to build muscle strength. She made him walk up the grassy hill in her yard and encouraged him to romp freely about. Gradually, his muscles improved and undignified falls have decreased. Over time the cat has gained even more control of his physique. Wrestling with Timber guarantees extended workout time each day.
At mealtime Woody must be reminded where his food station is. When he gets excited his, physical symptoms magnify with tremors and jerky movement. He walks as if he has sticky tape on his feet; pulling his legs up in high cadence. He may run into walls if he gets going too fast and frequently loses his balance. His resilience and acceptance is what endears him to Vicky the most. Despite physical challenges, Woody embraces life and lives it with charming exuberance. 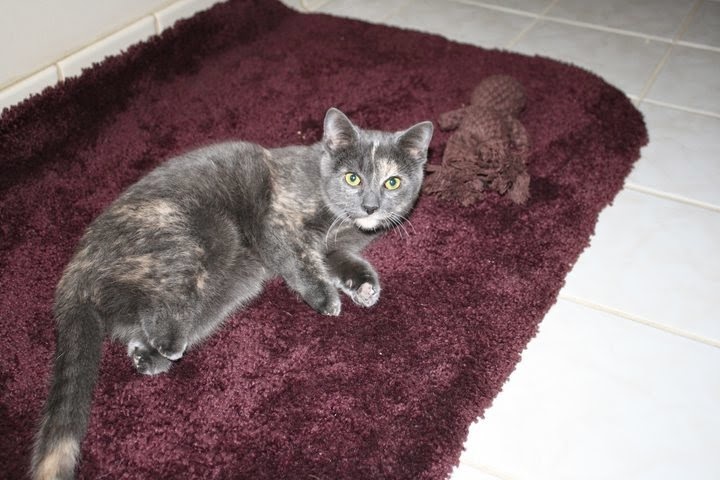 Fern has adapted to life as a normal cat. 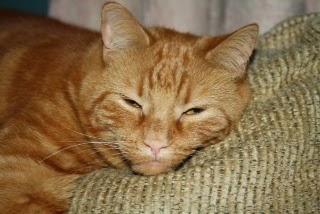 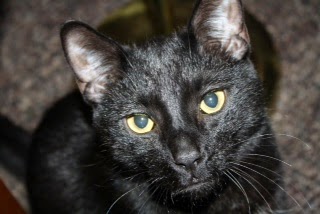 Woody is unfazed by failed attempts at landing where intended;  due to in-coordination.

Next week; Meet the rest of Vicky's menagerie in Special Needs Part II!