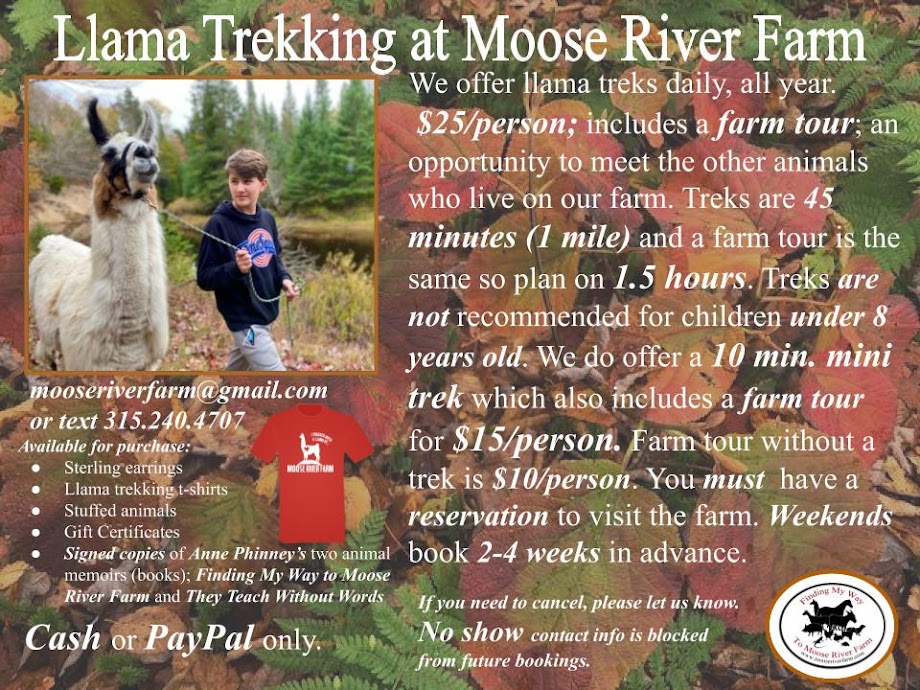 Good Evening,
Our second pig, Fiona appears in Finding My Way to Moose River Farm only during the ‘real time’ prefaces and conclusions of Part I, Part II, and Part III.  Her story will ultimately be told in the sequel but for now I thought you might enjoy learning a bit about Fiona and how she arrived at MRF after Rod and I had decided on no more pigs.
Our first pig, Noah, lived until the age of ten.  Sadly, he spent our first winter at MRF in a state of slow decline and passed away in early June of 2005.  Although not exactly friendly towards all strangers, he was very devoted to me, allowing me to snuggle close to him until the very end.  For more than a year we lived ‘pig-free’ on only the memories of Noah as we established life on our new farm.
The following November I attended the Syracuse Invitational Horse Show with a few of my riding students and friends.  Naturally, I found myself drawn to a petting zoo among the vendors in the expo hall of the On Center.  Among the assortment of miniature donkeys, horses and goats, was a tiny pot belly piglet.  Reaching over the low fence to pet her, I was suddenly overwhelmed with all of the good Noah memories; not the ones that included all the clothing he had destroyed while incorporating stray socks, shirts and underwear into his ‘nest’ or the abrasive wear on the fine finish of our furniture after he scratched himself against it.  No, I was overcome by Noah's sweetness as a tiny pig who ‘umphed’ contentedly while snuggling in my arms.  The Noah, who grazed on our lawn and wallowed in the wet sand of our small beach during hot summer days.  The 200 pound Noah who Rod hoisted onto the sofa to lie in my arms, (as baby Noah had done 180 pounds earlier), providing comfort for me, the evening after Ludie, (our ancient Dachshund), was euthanized.  The Noah who went for boat rides to Sunny Cliff with us on summer Sunday afternoons, and the Noah who snacked on blueberries with Mishka during our walks on the far side of Raquette Lake.
The little piglet that I was stroking was not for sale but the attendant at the petting zoo just happened to have a litter of pot belly piglets that would be weaned in another week or two.  After the horse show I returned home to break the news to Rod that I wanted another pig!
“No,” he said emphatically.  “We agreed that Noah was it.  No more pigs!”
“Yes, but I have changed my mind and think that a pig would be the perfect addition to the farm,” I reasoned.
“No.”
I can’t say that Rod relented because since Fiona’s arrival he has, on more than one occasion, (particularly when she is scratching herself on the finished woodwork), reminded me that he didn't want another pig.
However, just before Thanksgiving, I drove south into to pick up our 6 week old piglet.  Like Noah, she was tiny and adorable!  But unlike Noah, she had never been handled until this very day when she was chased around the large stall, (that she inhabited with her mother and five siblings), grabbed by the breeder and stuffed into a dog crate that I had brought with me.  During the entire drama, all of the little piglets screamed in distress as one of their own was plucked from the family and disappeared out the stall door, never to be seen by any of them again.
At the back of the crate she cowered while bracing herself on all fours.  Her eyes, wide with terror broke my heart.  She had no idea what was happening to her, who I was or what existed outside of the stall she had lived in since birth.
Originally, I thought I would name her Vanessa, because it was elegant and so lady like.  Driving back to Old Forge, I rolled the name back and forth over my tongue directing it to the terrified passenger in the dog crate.
“Vanessa,” I sang to her.  “Hello Vanessa, my little piggly.”
There was no sound coming from the crate.  I tried to imagine  what she might be doing in the crate, and worried that all the stress of leaving her family so abruptly might have killed her!  But just when I was about to pull over and check, I heard her change position and ‘urmp’ quietly.
Meanwhile, the name Vanessa, just wasn't fitting as well as I had hoped it would.  By the time we passed through and began heading North on Rt. 12, I had tried other names on the tiny piglet.  ‘Vera’, ‘Winona’ and ‘Lucy’ didn’t fit her either.  But, when the name ‘Fiona’ fell out of my mouth, she was christened immediately! 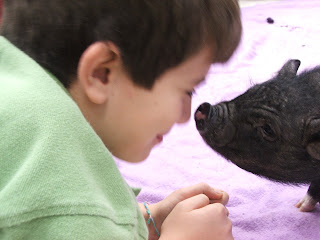 Fiona was a big hit with my students when she spent the day in our classroom shortly after her arrival at MRF. 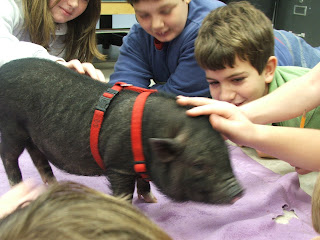 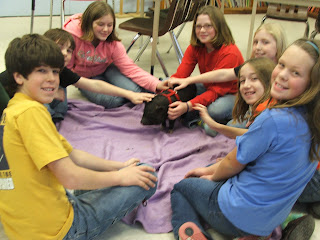 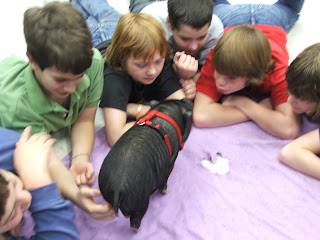 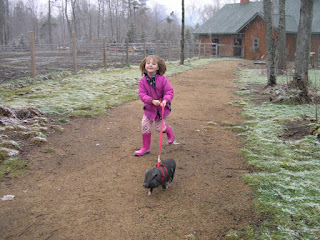 The irony of this little girl, named Fern is not lost on those of us who have read Charlotte's Web! 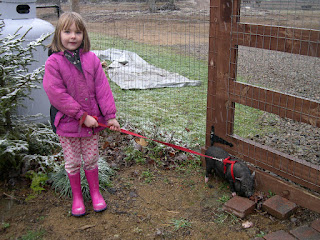 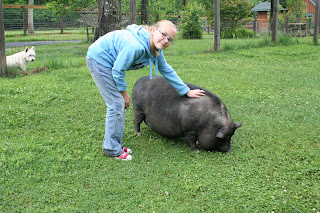 Both Fern and Fiona have grown up quite a bit! 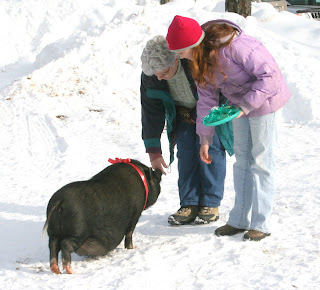 Fiona is a gracious greeter during the holidays. 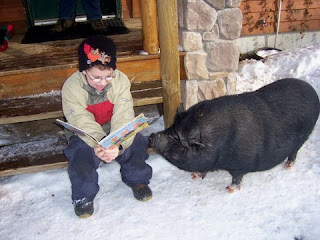 Fiona listens with great interest to the story of the Three Little Pigs.
Posted by Anne T. Phinney at 8:49 PM