Good Evening,
One of the consequences of owning horses is that they live very long lives in relation to more typical pets such as dogs and cats; on average about 30 years.  When you consider how human lives and circumstances change unexpectedly in that amount of time, it is more common for a horse to have more than one owner rather than one home in its lifetime.  Perhaps that is why the 18 year relationship between my two Quarter horses, Windy and Spy, ended with such an extraordinary display of devotion and acceptance.
I was so touched by Windy's reaction to Spy's death, that I decided to preserve the images with photographs.  Four years later, after Windy's euthanasia, I wrote an article, (Grief, Acceptance and Appreciation, Practical Horseman, June, 2011), about what I, (along with several others), witnessed on the day when these two bonded souls parted.  The photographs were never published with the article.  Therefore, I would like to share them here where I hope you will see them as images of hope rather than images of death.
For me they are proof that horses possess a soul and an uncanny ability to accept loss.  Now that both Windy and Spy are gone, I like to imagine them together, watching over Moose River Farm from Heaven above.

Quietly, we walked Spy out to the field with Windy in tow.  My husband, Rod, held Windy while we positioned Spy near his burial site.  Our patient vet waited through more hugs, kisses and tears.  Then, Spy slipped quickly and quietly out of my embrace to the ground.  The last thing he heard was a chorus of ‘I love you’.  When he was gone, my two friends and I commented on how beautiful he was.  His chestnut coat shone like polished copper and his two hind socks glistened like chrome.  As his mane blew gently in the breeze the rest of his body remained perfectly still.
At this point, Rod released Windy, who had been waiting anxiously about twenty feet away.  Windy galloped over to the body and stood between Spy’s front and hind legs.  Then he lowered his muzzle to Spy’s barrel and remained for several minutes with his head bowed.  He seemed to be absorbing Spy’s death as if he needed it to sink into his skin and penetrate his organs for understanding.  It was peaceful, it was perfect and it explained so much about the powers of acceptance that animals have.  This scene lasted for over one hour.  Fascinated by it, we watched to see what would happen next.  Occasionally, Windy left Spy to graze briefly before returning to the same spot between Spy’s front and back legs, where once again he took up the vigil.  Eventually, Windy laid himself down near Spy, quietly without stress.  In fact through the whole ordeal Windy never acted fretful.  He was clearly at peace, as was Spy, as was I.
Later that afternoon, Windy was returned to his small paddock.  From the fence he watched as my husband worked the backhoe and buried Spy’s body.  I checked on Windy often and never once witnessed any sign of stress.  He watched quietly but deliberately for the duration of the excavation.
As the months passed, the void that was the absence of Spy in the barn began to heal.  There are no regrets for the decision to end his life.  There is a deeper understanding of the acceptance of his death, thanks to Windy.  But most of all there is a greater appreciation for those who are still living in my barn and the memories that will fill the future.  Finally, I am more appreciative of the privilege and the gift of having horses in my life. 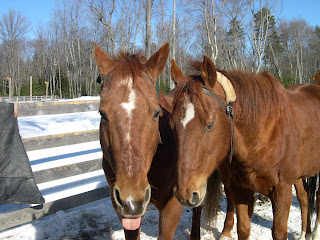 Windy and Spy were constant companions for 18 years. 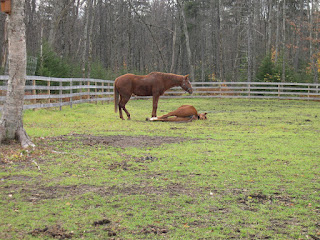 After Spy was gone, Windy stood over his body to absorb the loss. 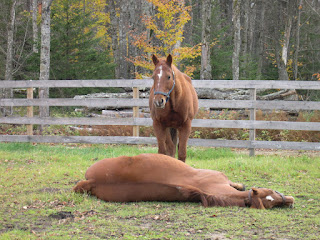 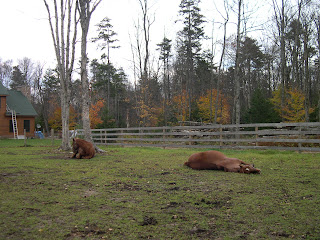 For more than one hour, Windy held a vigil near Spy's body.