Happy Thanksgiving,
As promised, the final installment from Where Attention Goes, Energy Flows, (Part 1, Part 2), is finally here!  The timeliness of this segment was deliberately set to coincide with our yearly celebration of thankfulness for all that life has to offer on our journey through it.  Enjoy!

Because Makia was in need of conditioning I constantly had to monitor her physical attention span because 'mechanically' she was not able to work for extended sessions.  It took me a long time to read the signals and decide which ones should be heeded and which ones needed to be challenged more.  Sometimes, I rode her through the woods on the mile of snow covered trail that encircles the farm.  The groomed footing and crisp air worked wonders on her attitude…mine too.
Many evenings I was able to work Makia in the outdoor ring.  She always performed at her best under the flood light accompanied by music.  These rides left me smiling all evening long and hardly able to wait until the next day when, conditions permitting, we might be able to work out there again.  The indoor ring made Makia feel a bit claustrophobic and caused her to careen about in the smaller space.
After dismounting I always threw my arms around her neck and hugged her tight.
“You are such a good girl,” I beamed.  A carrot or apple provided more tangible praise.
By February Makia was able to teach a few riding lessons; two of her frequent riders became Meg's girls, Danielle and Emily.
Around the first of May, Michele was on her way back to the Adirondacks after waiting out the winter months in .  She was eagerly looking forward to riding, but resigned to the fact that this summer she would not come to the barn to see that certain someone.  Instead, she would simply ride anybody that was available.  Still stuck thinking inside the box, I pictured her spending leisurely rides with Joshua, a hefty paint gelding, Spirit, a sinewy palomino American Saddlebred gelding, Lowtchee, a plucky Friesian mare, or Welby, my niece, Amy’s aged ex-racehorse.  What I didn't picture was Michele making that special connection with any one of them.  She loved them and had known them all for years but, she wasn't necessarily bonded specifically to any of them.
Michele wasn't home 24 hours before she was on her way to the barn.  It was good to have her back after a six month absence and she was eager to spend time with horses...any horses.  She didn't care who I assigned her to ride that day but, first I had to introduce her to the new addition, Makia.  Michele was instantly taken by Makia's gentle social nature.
"Can I ride her?" she asked, casually.
"Of course," I replied unable to think of a single reason why Michele couldn't handle Makia.
As you can imagine, Michele and Makia hit it off from the first ride.  Theirs is a different relationship from the one Michele shared with Murray.  Where Murray was Michele's baby, Makia is Michele's peer, a sister of sorts who like Michele had one child and views the world from a mother's watchful eye and perspective.

I am humbled by my doubts that Michele could ever find a horse with whom to form a special bond after the loss of Murray.
A wise horsey friend named Jackie once commented, "We never stop loving them and somehow our heart can keep growing as the next horse is loved just as much, (although she), will never replace the one before."

Sums it up for me...for Michele and Makia too.  RIP Murray! 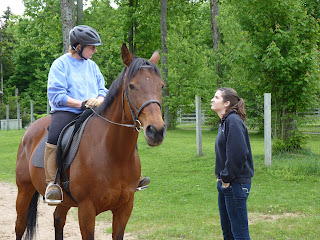 But most of all Makia and Michele have found each other and , (with respect to Murray), have been able to establish a special bond.
Makia and Michele demonstrated the canter when my class visited the barn last June.