Good Morning,
In my childhood dreams of living with animals I never really paid much attention to the facilities required for so many to live with me.  In my mind I was too busy galloping horses around enormous jumps and hiking with the rest of my menagerie that included lions goats, dogs and giraffe.  Perhaps I assumed that I would live in an old farm house with an old barn and acres and acres of land.
After falling in love with the Adirondacks, I met and did the same with someone who shared my love of animals and just happened to be good at building things.  Little did I realize that he didn't just like to do it; he was an exceptional craftsman who loved the challenge of building things well.  Soon after we were married he began to build a two stall barn for my horses, (eventually adding two more stalls and goats), on his small lake front property in Inlet, NY.  Lakeview Farm made my dream come true.  18 years later, Moose River Farm would send me beyond my wildest dreams.
So who is Rod Phinney and where did he come from?  In today's excerpt from Finding My Way to Moose River Farm, my other half is revealed.

Rod
Roderick Phinney grew up in .  However, every summer of his life was spent at on .  Rod’s mother’s family has owned a ‘boat access only’ camp called Sunny Cliff since 1904.  Not only had he grown up there, but his mother, Rachel, and her three older brothers had spent their summers there as well.

On Raquette Lake, Rod and his four older sisters learned to fish, identify trees, pump water, make balsam pillows, exist without electricity, row and paddle boats, sleep under the stars, (despite gnawing mosquitoes), chop wood and build campfires.  During the long summer days they water skied and hiked up for a heavenly view of .  At night they placed chicken bones around the fire in hopes of baiting wild animals that they could observe from their beds in the lean-to at open camp.  Luckily, nothing more dangerous than a raccoon ever arrived to entertain them!  One evening the children took hunks of foxfire, a bioluminescent fungus, to bed with them in an attempt to read by the organic glow of its light.
Their mother cooked pancakes every Sunday on ‘Big Bertha’ the wood burning cook stove in the rustic camp kitchen.  There was no phone at Sunny Cliff and for several years Rachel washed diapers by hand for at least two children not yet potty trained.  Growing up on Raquette was a magical experience and the family spent the rest of the year counting the days until they would return to camp, the one place where they all felt connected to the mountains, the lake and to each other.  It is no wonder that this beloved camp is what keeps Rod united with his sisters who still visit Sunny Cliff with their own families every summer.
As the only boy at Sunny Cliff for most of the time, (his Dad came up occasionally on weekends), Rod kept busy by building and taking things apart.  As a result he learned how engines and switches work.  He could maintain a chain saw and make minor repairs on the motor boat.
At home in , he was more fascinated by his bicycle as it lay on the driveway in pieces than as a vehicle on which to explore the neighborhood.  The day he got in big trouble for disassembling his neighbor’s tricycle is now family lore.  He was unable to reassemble it without the help of his very angry Dad.
...Rod attended community college to learn electronics and computer programming. While enrolled he took riding lessons for a physical education requirement.  After the credit was fulfilled he signed up to work in the barn during a vacation so that he could continue to ride.  Of course at the time he could never prophesize that decision. 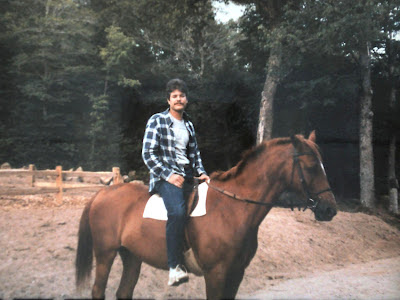 Promise took care of Rod that summer we met at the Raquette Lake Girls Camp.