Good Evening,
Intrigued by my blogging experience, many of my students have created blogs of their own.  The potential for having their assembled words read and interpreted by others is motivating.  It may even encourage them to linger longer when proofreading for capitalization and punctuation.  My students tend to gravitate toward animals for their blog themes and get excited by the endless possibilities for topics to write about.  This is just one more example of the power that animals possess to inspire and motivate youth.  I hope you will visit some of their blogs which I have posted on mine.

One of my colleagues told me recently that her daughter still had a story she had written in my class twenty years ago.  The story was called The Adventure of the Pi-rats and of course its inspiration came from our gregarious classroom pet rats.  I even vaguely remember the title of the story although I don't remember the plot!
I owe so much to our classroom rats who, like the iguanas, provided many lessons in caring, empathy and kindness.  In today's excerpt from Finding My Way to Moose River Farm, you will meet Sunshine and Shadow who endeared themselves to many.

Rats
Another democratic vote, christened the young rat Sunshine and she too became a cherished member of our classroom family.  The children learned to take turns holding her and to ‘parent’ her cooperatively.  Although Sunshine had a cage, we left the top of it off during the day and allowed her to investigate the chalkboard and windowsill.  Rats are very clean and choose to relieve themselves in one location if given the opportunity to designate it themselves.
In the spring we acquired a male rat, Shadow and allowed him to breed with Sunshine.  Oh, the lessons learned from all of these wonderful encounters with the animals.  The students waited with great anticipation through the twenty one days of gestation and glowed like proud grandparents when Sunshine presented them with seventeen pink ‘erasers’ that she cared for meticulously.  A week later the babies began to grow hair that divulged the secret of their individual coat patterns.  The children identified each baby by a spot on his tummy, a dot on her chest, or a patch next to its tail.
One of their favorite games to play was ‘What gender is it?’  After lunch I handed them each a baby rat at random and they had to identify whether it was a boy or a girl.  There were never any snickers or dirty remarks because the students were learning that animals, other than humans, live in a world of survival and purpose.  Sex is for perpetuating the species.  Babies are the adorable result.  Knowing the physical difference between males and females is important.  It is as simple as that. 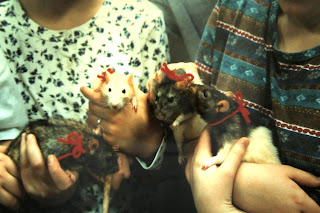