At the moment Moose River Farm does not have any resident fowl.  Rod and I talk about getting some chickens and employing them as pest control in a moat around the garden.  Unfortunately, Adirondack predators like coyotes, foxes and raccoon are a very real threat to chickens.  Once they discover how to intrude on the coop, they are relentless until the last 'cluck' is extinguished.  It is devastating to encounter the carcasses after a night's raid.  Therefore, before we invest our time, money and emotions into a new flock, a fortress will need to be constructed.
We had chickens years ago while living in Inlet.  Our lovely little flock of Araucanas lived well into their double digits, long after their egg producing years had ceased.  At one point we had adopted an ancient hen and rooster who lived with us for a year or two in retirement, (more like assisted living).  But perhaps the fondest chicken memory is from my youth when a young hen appeared out of nowhere in the barnyard.  In today's excerpt from Finding My Way to Moose River Farm, you will meet a special 'Chicken'.

Chicken
Although I knew nothing about chickens I had had a pet Rhode Island Red hen years ago.  She had appeared out of nowhere one day at Triangle Acres, the barn where Promise was boarded.  The only explanation for her sudden arrival was that she must have fallen off of one of the large trucks that raced up busy highway Rt. 309 which ran parallel to the farm's pasture fences.
‘Chicken’ spent the first week recovering from her ordeal in the basement of my house.  Eventually, my father found out about her and suggested that she move out to live with the other farm animal.  From then on she took up residence in Promise’s stall and soon could be counted on to produce an egg a day in a nest that she made in the corner.
Being an only chicken, she became quite friendly and followed me around the barn all summer.  She sat in my lap on those afternoons when I sought refuge from the heat and bugs in Promise’s stall.  Sadly, that fall, Chicken disappeared as suddenly as she had appeared.  I searched for days with great hope that she would reappear in the barn yard. 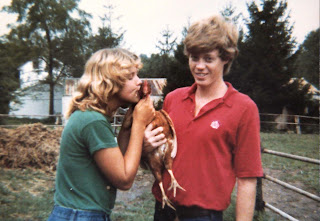 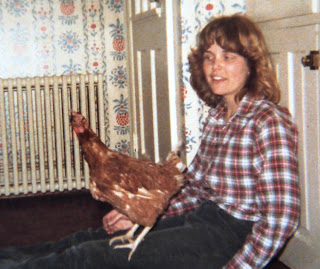 'Chicken', (like Pierre the goat), visited in my family's kitchen too!
Posted by Anne T. Phinney at 10:10 PM