Good Morning,
It is Memorial Day weekend and I am keeping myself mindful of friends and family members who now live only in my memory.  I am also remembering so many wonderful animals who stepped into my life either briefly or extensively and am so thankful for the privilege of their time with me.
Spike and Rosemary, the iguanas, were not the only reptiles that lived in my classroom.  A Veiled chameleon joined the menagerie in 1998 and provided my students with observations of one of the most interesting beings on the planet.  Most striking about the chameleon were the shades of indigo, teal and turquoise that covered his body in a camouflage pattern.  Unlike the iguanas, the chameleon was able to change his 'wardrobe' to match the mood he was in, (not necessarily to blend in with his environment). This vivid array of tones earned him the name Hue.
Hue's other extraordinary features included a prehensile tail that wrapped around our fingers and wrists for extra security while holding him.  His 'hands' appeared to be wearing mittens with the claws poking through at the ends.  He used these digits to walk along the branches and twigs in his tank.  His movements were slow and fluid but in a 'cha cha' back and forth dance rhythm.
Perhaps Hue's most prominent and endearing features were his eyes that rotated independently around in complete circles while hunting prey throughout his tank.  Apparently, the chameleon brain can interpret more than one image at a time resulting in stealthy hunting accuracy.
Ownership of Hue required a constant supply of viable crickets for sustenance.  Managing the crickets became almost the same as managing an additional pet in the classroom.  Every six to eight weeks a shipment of them arrived chirping and crunching in a box at the post office where the post mistress, (quickly and thankfully), handed them over to me.  Then, the students and I had to set up a secure plastic tote to keep them in with litter, food, and moisture.  The children learned that keeping the crickets healthy would ultimately keep Hue healthy too. 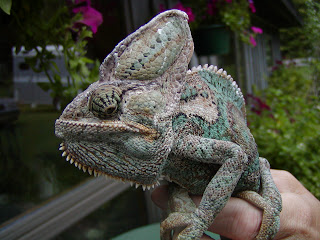 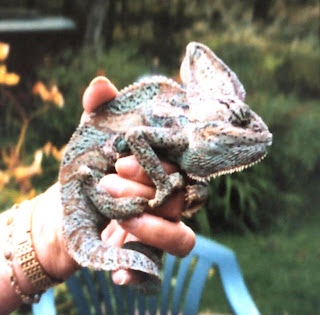 Hue was an extraordinary creature.