Good Morning,
I watched the Kentucky Derby yesterday on the edge of my seat as I'll Have Another chased Bodemeister to the finish line and won! Sadly, the favorite, Union Rags, had a difficult trip from the moment he left the starting gate, dashing the hopes of his trainer Michael Matz and owner Phyllis Wyeth.  That's horse racing for you; no matter what statistics are calculated in the months, days and minutes beforehand, it really comes down to the fastest horse during the two minute race.
Working for Michael Matz thirty years ago was the apex of my career with horses.  He was training show jumpers at the world class level then and dabbling in race horses on the side.  In today's excerpt from Finding My Way to Moose River Farm I've arrived for an informal interview at Erdenheim Farm.

Michael Matz
Not wanting to disturb him, I was relieved when he brought his big shiny chestnut stallion down to the walk and approached me as if he had been expecting the interruption.  His friendly smile put me at ease as we made our introductions.
“The job requires cleaning stalls and grooming the horses everyday before and after they’re ridden,” he stated, still mounted on the large stallion who was now dozing peacefully in a sun-spot at the doorway of the arena.  “Do you ride?” he added as an afterthought.
“Yes,” I responded unaware that I would actually get to ride horses and be paid for such a pleasure here at this beautiful farm.  Then I offered him a brief synopsis of my educational experience with horses.
A few minutes later, I thanked him as he returned to his training session.  I lingered at the rail to watch this exceptional athlete, now my employer, at his craft.  I had seen Michael ride many times over the years at the Devon Horse Show and the American Gold Cup.  In my adolescent years I had even been brave enough to approach him for an autograph.  But at this moment I watched him through the eyes of a horseman who was really beginning to understand the rider’s role in the saddle.  His lean long legged frame remained soft and light.  With perfect timing, Michael’s body whispered an appropriate aide that politely asked the horse to transition into the canter.  In addition to Michael’s perfect position, I was taken by the steady feel of his hands on the reins.  The whole atmosphere in the ring at that moment remained focused, calm and successful.  I wondered how many different horses he had ridden in his lifetime to develop such a gift. 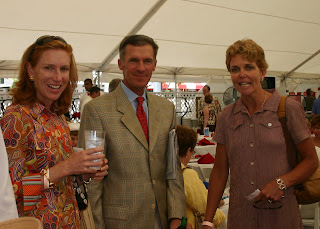 Chatting with DeDe and Michael Matz twenty five years after my working experience with him.