Good Evening,
Our first generation of Dachshunds, (Eric), included a miniature black and tan short haired male named Luther.  'Ludie' was not the best example of comformation for his breed, but what he lacked in anatomical correctness he made up for in his loving demeanor.  His comical appearance composed of airplane ears, and a long needle nose, endeared him to us.  Sadly, Ludie's extremely long back plagued him with the most common affliction in the Dachshund breed; herniated vertebral disc disease.
The long body of the Dachshund could really benefit from another pair of legs to support the middle portion.  Since this is impossible, their backs are prone to the development of protruding discs that initially cause pain and may eventually cause paralysis in some severe cases.  Ludie's condition followed the perfect textbook case.  Until he was six years old, our little Dachshund lived a carefree and pain free life, dashing about the yard, running up and down the stairs and jumping up on and down from the sofa.

Wheels for Ludie
Our only option, according to the young, (Cornell University), veterinarian, was surgery to remove the protruding disks that were pinching vital nerves between Luther’s vertebrae and then fuse the bones together.  This procedure would stabilize the spine, but did not guarantee that the dog would gain the use of his hind legs.  The surgery was expensive and Rod and I were not really in a position to justify this kind of expenditure on our budget.  With a heart broken by guilt I declined the surgery.  Our next option was to purchase a small cart that would replace Ludie’s hind legs and allow him to move freely around the house and yard.  This was more within our price range and we returned home with Ludie and all the information necessary to get him back on all four feet again.
Two weeks after measuring Ludie carefully for the perfect fit of his cart, it arrived via UPS.  Meanwhile, I made several phone calls and inquiries about our little dog in an attempt to find other options that could help his condition.  A veterinarian from NJ suggested that I put Ludie in the bathtub for swimming exercise.  If there was any chance of recovery, I would know the instant the dog was put into the water.  Dogs instinctively swim and sure enough Luther’s back legs began to paddle with uneven coordination when I held him just below the surface of the water.  Three times a day I took him out to the lake and held him for five minutes so that he could engage in this ‘doggie paddle’ therapy.
But it was a chance encounter, with a lady who just happened to be walking her Dachshund on a leash near the post office one day, that allowed me to feel more optimistic.
On my way into get the mail I started up a conversation with the woman as I instinctively bent down to pet her smiling liver colored Eric look alike.
“Oh I have one who looks just like this one,” I chortled more to the dog than to his owner.
“Aren’t they wonderful dogs!” she admonished.
“Yes, but our other one is suffering from back issues at the moment and is dragging his hind end,” I said with a sigh.
My mood had not been missed by the lady and suddenly she began to speak with great enthusiasm.  “Don’t get discouraged.  You just have to wait and you might have to wait a long time, weeks maybe, but don’t give up.  This dog had the same affliction and after two months, which I know is a long time, he started to regain the use of his legs.”
She had my full attention as I waited to hear more.
“It took a long time but eventually he began to use his hind legs more and more and after developing strength and feeling back, he is fully recovered.  You just have to be patient.  Our vet wanted to do surgery on him, but we couldn’t afford it and we are so glad that we just waited.  Now we are very careful when he gets to jumping around.”
She wished me good luck and for the first time in the weeks since Promise’s death and Ludie’s injury, I began to feel real hope.  Her words continued to inspire me over the next several weeks as I tended to Ludie’s needs.
Once he had figured out how to use the cart, Ludie’s depressed mood lifted.  With wheels attached he could race around the yard and tend to his business without me hovering so close.  Through the whole ordeal he never lost control of his bladder, but the steroids made him thirsty and therefore, increased his need to urinate.  Sometimes there were accidents in the house.
By mid September, Ludie still showed no signs of gaining the use of his hind legs.  I tried not to get discouraged as I remembered the woman’s emphasis on ‘a really long time’.  Then, on the last weekend of September, I took my two horses, (Windy and Spy), out to to visit a friend and work with her trainer for the weekend.  I was gone for three nights.  It felt good to get away from all the sadness of the late summer and concentrate on the education of my two young horses.  When Monday morning arrived I was renewed and ready to return to the challenges at home.  After the long trip back to Inlet, I pulled down the driveway with the horse trailer in tow and noticed a sign sitting on one of the deck chairs.  On closer inspection I noticed that the sign was attached to the little dog cart.  My spirit began to soar as I read the message that had been generated from our brand new state of the art dot matrix printer.
It read: Cart for sale; ask for Luther! 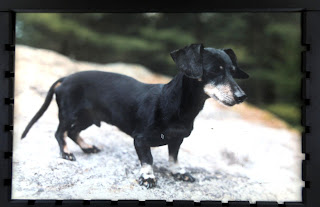 Despite his severe back issues at six years old, Luther lived to be 16! 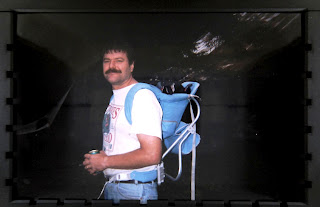 Eventually, he had to give up hiking, but we always took him along anyway. 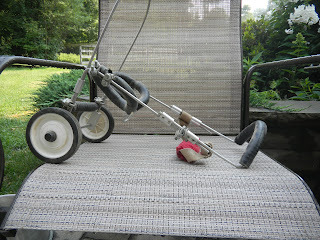 For some reason we never took a picture of Ludie using his wheels, but the little cart still hangs in our basement, (20 yrs later), as a reminder of his miraculous recover.