Good Evening,
Although living with horses truly is a privilege, shopping for them can be a bit stressful.  Patience is required while waiting for return phone calls, emails and videos to arrive.  However, once the choice is made, the rest of the experience is magical.  Seven years ago I came down with a case of Friesian Fever that could only be cured by purchasing one.  Unfortunately, the price of a full grown and 'broken' Friesian was way out of my price range.  Therefore, I could only consider buying a Friesian weanling.  In today's excerpt from Finding My Way to Moose River Farm I have just arrived at the famous Iron Spring Farm in Coatesville, PA, to meet Lowtchee for the first time.

Once outside of the car, I was distracted by a field of Dutch Belted Galoway cattle that were grazing close by.  As I was commenting on their Oreo cookie appearance, my sister asked in an excited voice, “Is that your baby?”
I turned around mid-sentence and there she was having been led out by the farm’s weanling manager.  Only eight months old, the filly was not very big.  Her tail was nothing but a flat mat of short spikes.  I approached her head and gently put my hands out to stroke her neck.  With bulging eyes and flaring nostrils the filly strained at the tiny leather halter around her head assessing the stranger who was touching her.  I walked the circumference of her body and marveled at the way she was put together, resembling a Friesian but with physical secrets to be revealed over time.  The youngest horse I had purchased to date was a two year old.  This age was new to me; like having to pick a caterpillar before it turned into a butterfly.
I asked if I could lead her out to the paddock where my captivated entourage and I could watch her move around.  As we walked farther away from the barn she became a bit agitated, clearly indicating that she was not happy to leave her herd mates who were cozy back in the barn.  With a little coaxing the filly allowed me to guide her out to the paddock.  It was unusually balmy for January, but cloudy with drizzle.  Several human bodies formed a fence to prevent her from leaving a small area of the paddock.  We all clucked at the little filly as she dutifully trotted about demonstrating the same floating gait I recognized from the video.
As I watched her graceful display, my mind swept rapidly back over the years creating a collage of my horsy life.  It began with that hopeless ten year ache in my heart to have a horse of my very own.  Finally, at sixteen, a horse of my own became reality followed by college degrees in Equine Studies and Animal Science, a job grooming horses for one of the most celebrated professional equestrians to date, and a life up to the present with horses ever at the center.  And now I was shopping for a Friesian to raise and train for my very own.  Not just any Friesian, but this little girl Friesian, with her lovely temperament and easy movement.
All too soon, it was time to walk the filly back to the barn where I was able to witness her calm demeanor in the company of her companions.  From the safety of her stall she completely relaxed and showed me how sweet she really was.  With great interest she poked her muzzle into my hair, hands and all over my jacket.  Fifteen years and eight geldings later, I was going to have a girl in my barn again. 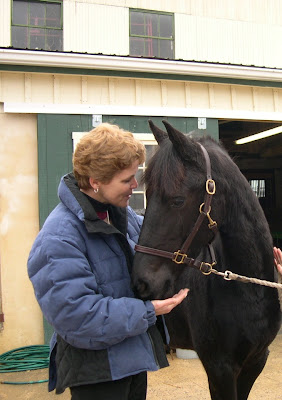 I watched this video 'mega' times in anticipation of my filly's arrival.
Lowtchee, 8 months old.