With a few exceptions, most of the posts published so far on this blog have been stories that conclude with tidy happy endings.  This may indicate that life at Moose River Farm exists under nothing but sunny skies.  If there is one lesson that I have learned over and over again while living with animals, it is that life is the very best when there is a balance of highs and lows.  We tend to fear the inevitable sadness that living with a pet will bring when age, injury or illness prevent the animal from living a quality life.  Although I have lost count of the number of animals that I have bid farewell to, the event never gets easier.  Through experience I have become wise about the finality of death and reaffirm my philosophy of acceptance every time it arrives at Moose River Farm.
Each loss reminds me how precious life is.  The most I can ask for is that the animal has lived a long happy life full of positive human interactions.  Striving for this every day enables me to accept the end when the time comes.  Then, I can manage my grief knowing that I gave this wonderful being the very best of me.
In today’s excerpt from Finding My Way to Moose River Farm, our sixteen year old goat, Hannah, makes a point of saying goodbye just before she takes her last breath.
Hannah Says Goodbye
After her, (brief), disappearance, Hannah began to age rapidly.  She spent more and more time standing quietly in the dark cool wash stall or feed room where she could catch a refreshing breeze through the open doors.  Sometimes she bleated softly to herself, perhaps due to pain.  Through it all she continued to eat and function normally.
In late June, Rod and I traveled to for a cruise with my family.  The animals faired well with Cindy as their caregiver in our absence.  After a week away we were eager to return to Farm.  The following account occurred on our first morning back in the barn.
When the phone rang I answered and became engaged with the caller.  Rod was fiddling with a stall door in need of an adjustment at the far end of the aisle and our boarder, Irene had just arrived in the barn to see, (her horse), Ben.  While continuing my conversation on the phone Hannah approached me and leaned her whole body against my leg.  Instinctively, I reached down to cup her head in my hand and scratch her chin for just a minute.  She bleated softly in reply as I stroked her face.  As my phone conversation continued, I paid no attention when Hannah gently pulled herself away from my grasp and walked into the feed room.  Within one minute the call ended and I went into the tack room to hang up the phone.
“What’s wrong with Hannah?  Anne, I can’t get her up.  She’s not responding,” Irene called urgently as she desperately tried to pull Hannah to her feet.
I rushed to help but it was perfectly clear that Hannah was gasping her last breath before her whole body went limp.  Irene then gently laid her on the concrete floor.
My eyes filled with tears.
“There was no warning!  No sign!  Just a minute ago she was leaning on me,” I whimpered.  At Irene’s urging I dropped to the ground and put my hands on the dead goat.  I bent down to kiss her and whisper that I loved her, but it was too late.  She was dead.
Rod, drawn by the commotion in the feed room, approached the scene.  He had just witnessed Hannah pressing against me and at the time had signaled how sad she was with his expression.  We stared in disbelief at our beloved dead goat.
Looking back, I believe on the day she had disappeared, Hannah passed out in the woods and was too weak to rise when we called for her.  The vet assumed her heart had given out due to her advanced age which was four years longer than the average for an old goat.  And as for a sign of her pending death, I now believe that she waited for me to return home from vacation and that when she pressed against me and bleated softly in the moments before she died, she was in her own way, saying goodbye. 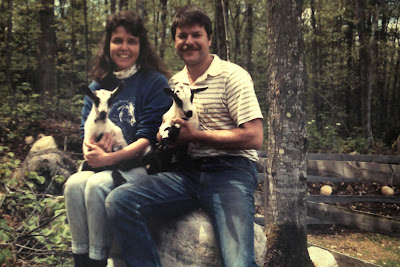 Our baby goats, Rachel and Hannah, (in Rod's arms) lived full long lives.  What more could we ask for?