Good Morning,
My Dad was a complicated man who worked hard with one main objective; to educate his four children.  He was typical of fathers from an era when interacting with children was a mother's job which allowed him to remain emotionally out of reach from us.  My horse addiction appeared to be an irritation that he rarely discussed with me.  It wasn't until his sudden death of a heart attack at age 62 that I became aware of just how proud he was of his daughter the horse nut.  This realization allowed me to finally feel the love he rarely showed.  In today's excerpt from Finding My Way to Moose River Farm the inquiries of strangers still have a profound effect on me after almost twenty years.

Realizations
Over 300 people attended the memorial service later Friday afternoon.  My brother George’s beautiful eulogy provoked laughter as well as tears from the crowd.  The staggering number of mourners offered great comfort to my family as we bade farewell to this man who had given us so much while remaining at an emotionally safe distance.
Sue and I stood next to each other in the receiving line for hours shaking many hands that belonged to people we had never met before.  We marveled at how each one, whether male or female, remembered our father warmly for his great sense of humor, kidding abilities and undying support for the Philadelphia Eagles.
But what intrigued me the most was the number of people who looked from Sue to me and asked, “Now, which one of you is the horsewoman?” or “Which one of you has horses?” or “Which one of you rides horses?”  “Your Dad used to talk a lot about his daughter who loved horses.”
Although he had rarely shown enthusiasm for horses with me, there were people he proudly chided to about his crazy kid who loved horses.  This realization had a profound effect, allowing me to accept my father with great adult wisdom.  He was a flawed man, inept at showing his children much in terms of an emotional connection.  But today I have no doubt that he loved us all. 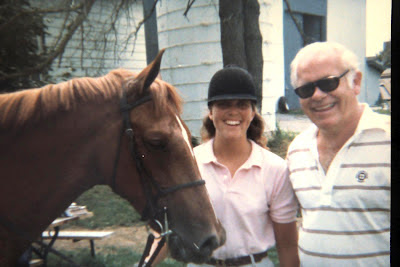 Promise, Dad and me