My husband's family has owned a camp called Sunny Cliff on Raquette Lake in the Adirondacks since 1904.  It is a special place revered by Rod, his four older sisters and all of their young adult children.  During retirement, Rod's parents, Big Rod and Rachel spent the four good weather months of the year at Sunny Cliff and eight months in Florida dreaming of their Adirondack homestead.
When I met my Rod, he was raising a ten week old husky mix puppy named Mishka at Sunny Cliff.  This adorable ball of fluff had been given to him by his sister, Karen, who owned the pup's mother.  Since Rod was busy working full time, Mishka's care and well being were provided by Rachel.  As a result Mishka and Rachel developed a very special bond.
Unfortunately, huskies are notorious for their desire to run long distances away from home.  For her safety, we had to keep Mishka tethered on a cable at our home in Inlet.  In today's excerpt from Finding My Way to Moose River Farm our energetic husky gets the freedom she so deserves.


Mishka
All too soon the leaves began to change color and a chill crept into the air, a signal that Big Rod and Rachel would be leaving soon.  Mishka never fretted over their packed boxes or the trips they made across the lake to pack the car.  However, once they were gone her freedom ended and she returned to her tethered run in Inlet.  With a weary sigh she seemed to accept the circumstances.
Rod frequently took her back to Sunny Cliff with him on the days he spent moving docks and closing up for the coming winter.  Sensing Rachel’s absence, Mishka remained on Rod’s party barge throughout the day.  Even after Rod called her to join him up at the house, she returned to the boat preferring to wait for him there instead.
Mishka resigned herself to life in Inlet with grace and dignity.  But once the sun began to heat up the in the following spring, she became restless.  By May she stood alert in the yard and concentrated on every car that came down the driveway.  When the car did not turn out to be who she was hoping for she relaxed her vigil and ignored the guest.  Not long after Memorial Day, the car she had been waiting for finally appeared.  Her entire body twisted and wiggled with excitement once she identified the driver and passenger who emerged from the car.  Then she released a howl and cry with little short barks that she never uttered except on this occasion.  As Big Rod and Rachel fussed over her in return, she pranced in front of the car door.  When it was opened she leapt right in and sat down quietly in the space that had been reserved just for her.
Then Rod and I would stick our heads in to say goodbye.  With an air of impatience she turned her head away from us, refusing to make eye contact for fear we might make her get out of the car and stay behind.  With a hug and a smile we sent her off for her long awaited four months at camp with Grandma and Grandpa.  After all the car doors were secured, the station wagon made its way up the driveway, back to Raquette Lake and Sunny Cliff for one more summer of freedom.  This routine continued unaltered for thirteen wonderful years. 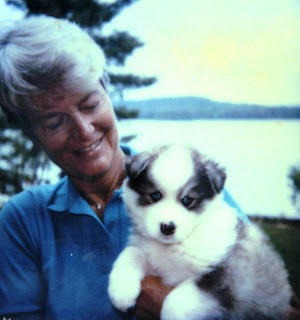