Good Morning,
Just before Christmas in 1992, some residents on Fourth Lake watched helplessly as the freezing water entrapped a large domesticated Pekin duck in its grip.  For seven days the duck flopped about in an effort to free himself.  Finally, the ice was safe enough for two men to maneuver a hovercraft out to rescue the stranded animal.  The duck was brought to me for rehabilitation and eventually became a beloved resident of our farm.  His endearing good nature won over the heart of a friendly hen who lived with us as well.  The following excerpt from Finding My Way to Moose River Farm describes the beginning of this unique bond.

Christopher and Louise
Christopher spent his first several days with us in a horse trailer.  This provided him time alone to recuperate and catch up on some much needed calories before being introduced to the residents of the barn.   On Christmas Eve we took him to the barn to get acquainted.  His first reaction was that of a shy child, new on the playground.  The horses and goats paid little attention to him as he cowered in the darkest corner.   Then he saw Louise.
Louise was a Rhode Island Red chicken who had hatched from an egg on our kitchen counter the year before.  As a result of her imprinting on us, Louise preferred human company to that of the flock.
Christopher’s shyness dissolved into curiosity as he abandoned the safety of his corner to inspect her.  She was unimpressed, going about her business, scratching in the hay for tidbits.  Honking softly he followed her around the barn and out into the driveway where she continued to scratch and peck in the snow.  Later, as the day faded to twilight, we found Christopher and Louise snuggled together in her thick nest of hay at the back of the barn.  This was just the beginning of a relationship that lasted for years to come.
Through every season of the year, Christopher and Louise were together.  The only time they parted was when Christopher snuck down to the lake to behave like a duck, dunking, oiling and preening his magnificent white plumage in the water.  He stayed long enough to tend to his grooming needs then, waddled up the lawn, honking urgently to find the hen.  Once he was back in her company the honking quieted to his signature low rumbling, indicating all was well in his world.
During the deep freeze of the winter months, Christopher and Louise remained close to the barn, leaving only briefly to investigate on those rare days when sunshine visits the .  During the spring thaw, as water rushed to the lake, Christopher could be found celebrating by splashing, gleefully, in the runoff crevices of our driveway.  Louise, always close by, scratched in the exposed mud for earthworms.  This scene added to the euphoria; good weather was on its way.
In the summer the pair was out of the barn at first light.  They spent the long hot days browsing and napping all around our property.  The twosome entertained many friends and family members who visited us in the summer.  In the late evening of those long summer days, Christopher and Louise, full from a day of gorging themselves on the lawn, could always be found snuggled in their nest, safe and sound for the night.
Autumn was a time for them to alter their habits in preparation for winter.  They spent more time in the barn, not wishing to venture outside until the sun had warmed things up a bit.  They ate voraciously as if they might never see food again.  On Indian summer days the duck and the chicken returned to their summer routine with Christopher stealing chances to bathe in the lake. 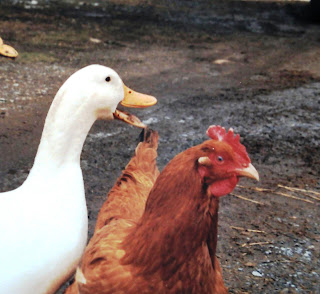