Happy Easter,
As we celebrate the signs of new life all around us on this Easter Sunday I want to take the opportunity to thank everybody who has visited my blog over the last two weeks.  I am thrilled by the number of 'pageviews', (over 1,000), that have accumulated from around the world including Australia, Russia and Germany!  Tomorrow I will return to my classroom after a two week rest full of animal interactions, horseback riding and of course writing.  My plan is to produce at least two new posts a week that I hope you will continue to follow.  In the meantime, please check out the articles and other blogs that are listed at the right side of this page.  Thanks again everybody!
In 1995 Rod and I were offered the option of adopting a baby pot belly piglet.  This luckless little fellow needed to find a new home after his first family discovered that living with a pig in the house is much more challenging than living with a dog.  Feeling confident that we could give him a good life we accepted the offer and learned first hand that a pig in the house requires patience, flexibility and... a sense of humor.
Today's excerpt from Finding My Way to Moose River Farm is about our first 'tiny' pig, Noah.  Enjoy!
Noah
The piglet was still a bit groggy from his, (castration), surgery when I saw him for the first time.  He was tiny; only about fourteen inches long from end to end with big liquid brown eyes.  Meg, (Dr. Meg Brooker), estimated his age to be around ten weeks. The little snout above his mouth pumped up and down trying to recognize me by scent.  Reaching into the cage to stroke his little pointy ears, I fell in love with him immediately.  Meg placed him in my arms and once again, another extraordinary chapter of my life with animals began.
I brought him home in a dog crate and left him in the powder room to take in his new surroundings quietly without having to deal with our dogs.  Eventually, I let him out to investigate the kitchen and area around the woodstove.  He seemed a bit overwhelmed as his little hooves tapped about on the parquet floor.
At one point I went into the powder room to blow my nose and became suddenly aware of the little piglet’s reaction.  He must have thought that another pig was nearby because he grunted and ‘neorted’ with great enthusiasm in reply.
I loved holding him in my arms and resting my cheek in his bristles.  He was not cuddly soft for those bristles poked through my sweater and into my skin.  He truly loved the interaction and spent the evening in my arms as we watched television.  His shiny black skin was naturally clean with no offensive odor.
Rod named him Noah, hoping that if the ancient Noah was the last one on the before the doors were closed, this little piglet might be the last animal on our ‘’.  In addition to all of the classroom pets, we now had three horses, three dogs, five goats and a piglet.  The was definitely full! 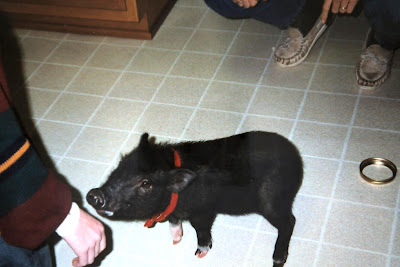